Posted on August 6, 2011 by NearlyHomeGrown.com

In the middle of what seems like the longest heat wave in history, my 4 year old came down with a head cold.  Last weekend I had noticed homemade egg noodles at the Phil’s Family Farm booth at the KGFM, so this weekend I stopped by Phil’s and picked up 2 8oz bags of the homemade narrow egg noodles.

I have a family recipe for chicken noodle soup that calls for boiling a chicken until all that is left is tasteless muscle fiber and using the resulting broth for the soup base.  I had also picked up a free range fryer from Phil’s, but it seemed like such a waste so I opted to use organic chicken broth instead.  I use Pacific Natural Foods low sodium, but any broth you use should be fine.

Bring broth and carrots to a boil then reduce heat to a simmer.  Cook for 20-30 minutes or until carrots are cooked to desired tenderness.  Add noodles and cook 7-10 minutes or until noodles are done.  Salt and pepper to taste.  Makes about 7 servings. 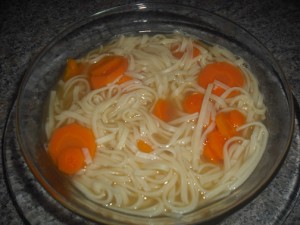