How Does My Garden Grow – Part 2

Posted on February 26, 2012 by NearlyHomeGrown.com

In mid December the indoor garden was really taking shape.  The lettuce was doing great and providing a couple of salads a week, the spinach was coming along and the 3 basil plants I purchased from Wild Family Farm over the summer were looking seriously picked over due to my insatiable appetite for fresh basil on almost every meal.

And then everything changed.

On a shopping trip to Green Acres I spied some potted basil plants from a local greenhouse.  I picked two of the most likely plants and congratulated ourselves on giving my basils at home a well earned rest and recoup.  I took the new basils home and introduced them to my garden not knowing they were carrying aphids.  Very healthy, fecund aphids.

About a week later the aphid infestation became apparent.  They engulfed the spinach, the swiss chard, the lettuce, the basils and even the kale!  The only plants that were safe were the oregano, rosemary and chives.

Prior to the introduction of the new basil plants, I essentially had a sterile environment.  The previous owner had not had a single houseplant, and before my indoor garden, neither did I.  After discovering the invasion, I quickly researched my opponent and learned that aphids are the bane of gardeners everywhere.  I researched treatments methods that are considered organic and headed to the local Menard’s.  The first line of defense was Neem.  I followed the instructions and made sure to get the undersides of leaves where aphids like to hang out.  I used it for two weeks as directed and it reduced the aphid population, but then they rebounded again.  I moved down the list and made a second attempt with a pyrethrin mix with the same results, an initial reduction in aphid population followed by a resurgence.

Despite two disappointing experiences, I still wanted to stay organic if possible and decided it was time to try diatomaceous earth.  Everything I read said this stuff would prove lethal not only to the aphid population, but also to any spiders, soft bodied flies or other insects that wondered too close.  I coated all of the plants including the ones the aphids were avoiding.  I coated the tops of the leaves, the undersides of the leaves, the top of the soil mix, I coated everything!  Three weeks later all I had to show for this was dusty aphids.

I had three choices at this point; go with some serious chemicals that would keep me out of the organic club, put all of my inside plants outside and let winter kill the aphids and the plants and try again in a month or so when I could be sure that all the aphids were gone or natural predators.  I opted for the natural predator route with the caveat that if this didn’t work, I was going to kill everything and start over.  I ordered the ladybugs from a company with good reviews and 1,600 squirming ladybugs arrived a few days later. 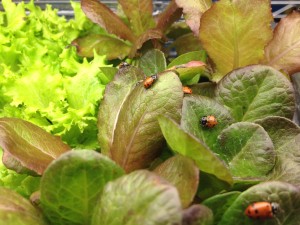 I released the ladybugs on all of the plants and waited.  One day later the aphid population was scarce.  Two days later I could not find an aphid anywhere!  It has been two weeks now and the ladybug population is down to maybe 150, but still no aphids to be found.  I have a suspicion that there are aphid eggs waiting to hatch, but also a hunch that the ladybugs may have pulled off the same trick due to the difficulty I had trying to take a photo that didn’t include mating ladybugs!  So I have high hopes that if there is a round of aphid hatchlings in my future, there will also a be a resurgence of the ladybug population around the same time. 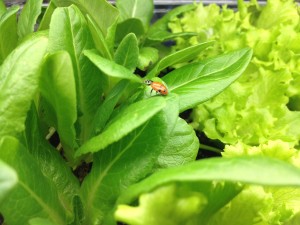