Posted on February 8, 2015 by NearlyHomeGrown.com

The groundhog has come out of his hole to do his evil once again this year and after few minutes spent researching his predictions (hint – he pretty much always sees his shadow and his accuracy is debatable) I got down to the real business of early February – seeds!

My 2015 garden as it exists on paper and in seed packets, has already expanded over previous years’ in terms of both square footage and vegetables to be grown.  It may expand a bit more before the daffodils raise their heads and announce the official start of Gardener’s Spring.

I have been busily recycling the newspapers left in my driveway and on the office breakroom table for months into folded newspaper seed pots in preparation for this first full week of February. 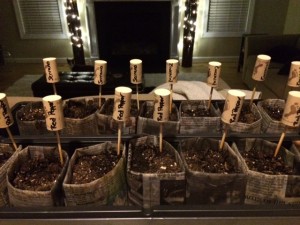