Last fall when I decided that edamame would be a fun and delicious addition to the garden, the only seed variety available through Baker Creek Heirloom Seeds was a variety called Envy.

The spring crop consisted of roughly 130 plants in a 4’x4′ bed. When the spinach and lettuce bolted in mid-May, I used some of the left over seeds to cover crop those areas until fall when I can replant leafy greens and start my fall planting of the soybeans.

Earlier this month I harvested the official crop with a weigh in of 1lb, 6oz of pods. The cover crop plants are producing just as vigorously as the spring crop so it looks like I will have a bonus mid-summer harvest of Envy.

Envy soybeans which average 2 beans per pod are on the smallish side for those of us used to restaurant edamame with its typical 3 and 4 beans.

I did not use soil inoculants and relied on the native bacteria population in my soil to create a symbiotic relationship with the plants and form the nodules that help fix nitrogen. The nodules were stripped from the roots and worked back into the soil as I harvested the plants. 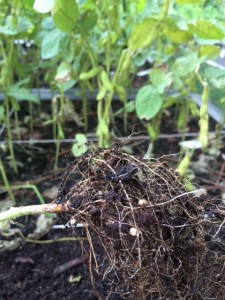 The pods were washed and blanched for 3 minutes, then plunged into ice water to stop the cooking process inside. They were dried by being spread on a towel then blotted with a second towel before being divvied into 3 freezer bags of about 7.3oz each. 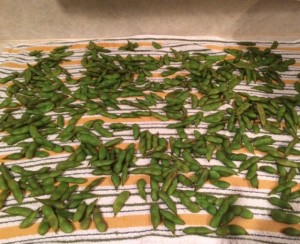 I waited about 2 weeks before preparing one of the packages to assess the entire enterprise. 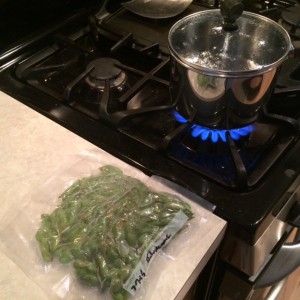 1. Baker Creek has since added two other soybean varieties one of which averages 3 beans and I want to try it for my fall planting and compare the total pods/weight produced. The Envy were delicious and I am looking forward to preparing my cover crop harvest in a few weeks.

2. Of the entire harvest, only a handful of beans had the fibrous taste and texture of being on the plant a little too long. I count this as a success since it was my first year growing and the harvest instructions say things like “harvest before the pods have a hint of yellow color”. This is the sort of advice that only works AFTER they have a hint of yellow.

3. The 7+oz servings were a little large, so next time I will prepare in 5oz packages.

4. Edamame will now be a permanent fixture in my garden.