Even before the surprise bounty of figs arrived on my doorstep Saturday morning, I had a hefty agenda for my first full weekend back home in my garden in 3 weeks.

Serranos – picking them at both the green and red stages, sharing some with friends and preserving the rest.  My favorite methods for enjoying serranos in the off season are vacuum packing them fresh and whole and freezing or else sliced in half, seeded, roasted on the grill and then vacuum packed. 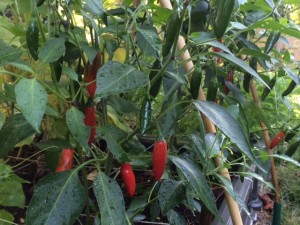 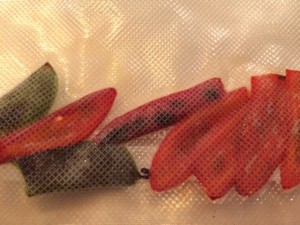 Cucurbits – I needed to put out 8 new 1’x1′ boxes for the fall planting of cucumbers and summer and winter squashes to keep them from shading their neighbors in the garden as well as giving them a bit more room to spread out as well.

I will be making an A-frame trellis out of bamboo poles and chicken wire this weekend to provide a climbing structure for the back/north-most row that will have cucumbers and spaghetti squash.  I am planting 4 varieties of zucchini on the front, south-most row which include 3 new variates in addition to the Black Beauty that have done well despite the invasion of squash vine borers.

I also removed the herbs from the middle garden bed in the above shot to make room to double my strawberry patch into a second box for next year with the prolific runners from this year’s plants that I have been rooting in containers.

The most handsome specimens of rosemary, sage, parsley and thyme were put into terracotta containers and the rest were dried in the inaugural run of my food dehydrator, crushed and stored in spice jars. 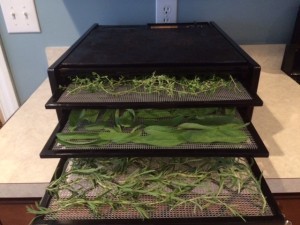 To me, the expression ‘making hay while the sun shines’ means thinking about where the food on my table in January will come from when I am drowning in the abundance of summer.

1 Response to Making Hay While The Sun Shines – Part 2