Posted on August 23, 2015 by NearlyHomeGrown.com

I have three 24 x 36 cork boards in my home office, devoted to helping me organize my garden.  They are filled with seasonal planting guides for Zone 7, my own garden plans for seasonal and succession plantings, companion planting charts and the listings of vegetables by family that make sense of them.

Interspersed between these work-a-day printouts are some of my favorite images of the WWI National War Garden Commission (1910-1920) and WWII Victory Garden (1930-1950) posters.  I have long been a fan of these nostalgic images for what they represented at the time and what they represent to me* today.

The images, although quaint and nostalgic now, when they were produced were part of a bold initiative that is difficult to imagine ever repeating itself in the light of 21st century politics.  The world leaders at that time asked of their people to be a little more self-sufficient for a while, to do a little more for themselves and consume less, not for any immediate personal benefit for those making the sacrifices of growing and preserving their own food, but for “the greater good”.  They also represent a generally accepted, society endorsed back to the land movement long before the Foxfire books of the 1970s solidified in the public mind that unless you are a farmer by trade, growing a significant portion of your own food is a hallmark of an alternative lifestyle.

With the War Gardens of WWI and later the Victory Gardens of WWII, ordinary households economized during rationing.  They grew, ate, canned and preserved some of their own produce to nourish their families and to help the war efforts by using less of the nation’s production and transportation resources so those resources would be available elsewhere.

It was a time of lofty and aspirational ideals and pulling together for a purpose larger than ourselves.  Some of the growing ideas and solutions promulgated during that period, particularly of WWII were a mix of good and pretty bad, but the overall concept was a good one – a decentralized food system, self-sufficient citizens and a government system that supported the bootstraps mentality that has become a hallmark of those generations. 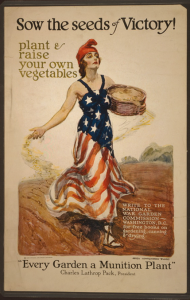