Posted on September 27, 2015 by NearlyHomeGrown.com

It has been raining two things since Thursday night.  Raindrops and pine needles. 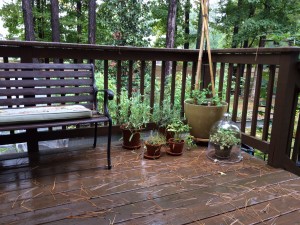 Going into my second fall as a North Carolina gardener, I have started calling them Piedmont sand because they are a pain to clean up and get into absolutely everything!

Last year I made a leaf composting bin to reduce yard waste and build soil with all the sweet gumball leaves that fall into my backyard.  With each infusion of leaves, pine needles inevitably found their way into the bin also and they take much longer to break down.  After a year of compositing and being filled to the brim with leaves no less than 4 times, I am left with a small pile of garden gold mixed in with a small haystack of needles.

There is conflicting information on whether pine needles add a significant amount of acidity to the soil as they break down or not so to be safe, this mixture will be used to compost around my acidity loving blueberry bushes.

I am reasonably certain that the 8 pine trees in my backyard are Pinus taeda, the loblolly pine.  They will shed needles almost continuously from now until spring.  This year’s needles will be used to mulch around the magnolia tree, which also likes a bit of acidity, after being broken down a bit with a weed wacker to speed up the decomposition.

I hope to find a happy balance between the amount of needles the trees can produce in a two year span and the amount of pine needle compost/mulch I can use.

This entry was posted in Backyard Gardening, Compost, Organic, Sustainable. Bookmark the permalink.