Posted on November 1, 2015 by NearlyHomeGrown.com

My 3 serrano plants have produced so abundantly this year that even after freezing enough raw and roasted peppers to last until next year’s harvest, giving away dozens more to friends and co-workers and drying many more to save seed, I am still drowning in the spicy, delicious peppers.

I first learned the distinctive flavor and heat of these peppers back in 2010 after searching and trying one of those ‘top secret restaurant recipes revealed’ sites for the Chipotle guacamole recipe*.  As soon as knife met serrano the unmistakable scent that I associated with Chipotle guac filled the air and I was sold on serranos and I have been growing them since.

Serranos are a type of chili pepper that fits on the Scoville scale between between the less spicy jalapenos and the more spicy cayenne peppers.  The Scoville chart has its shortcomings, but it is the closest thing to an authoritative ranking of spiciness of chiles that is in culinary use.

What I like about serranos is that they have a taste, not just heat, so they add an actual flavor layer to dishes made with them, not just spiciness.  I have not been able to find a chart on chili peppers and umami but my taste buds tell me serranos have it. 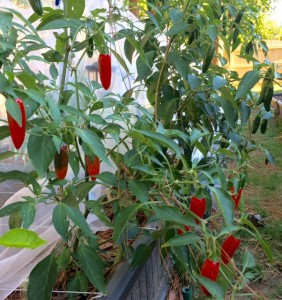 So as much as I love serranos, the still going bumper crop of this year’s harvest has presented the challenge of what to do with all of these serranos!

Drying ripe, red chiles to save seed made me wonder what the ubiquitous crushed red pepper flakes in my spice jars were made of.  A bit of research later and I found that crushed (or dried) red pepper flakes are the result of red chiles, but can be made of a blend or different types and are usually not labeled with the type(s) of chiles inside and are generally blends of several types of peppers.

Back in September I decided to gamble some of my over abundance on an experiment and dried about 10 fully red serranos and popped them into the food processor, seeds and all.  The seeds are generally believed to convey even more heat to the dishes they are added to than the fruit body so most recipes specify that the seeds should be removed.  But the crushed red pepper flakes I have seen always have visible seeds so I left them in. 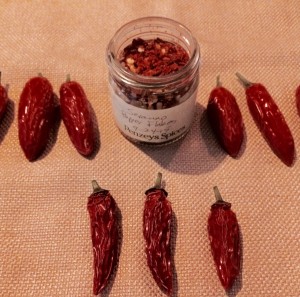 The experiment in making my own crushed red pepper flakes was a huge success!  They definitely add the spicy kick that I am accustomed to with the store bought spice and my serrrano-only version is also adding the flavor and body that I associate with serranos.

*Interesting side note – the “official” recipe on the Chipotle website calls for jalapenos and is a possible red herring so that the made-at-home version does not taste quite as good as the restaurant version.

2 Responses to Cooking with Wilbur Scoville