Posted on November 21, 2015 by NearlyHomeGrown.com

In Growing Sustainability – Part 1 I lauded the War Commission Gardens and Victory Gardens for what they grew, a lot of food and a more self-sufficient citizenry.  At their height, over 20,000,000 Victory Gardens dotted the American landscape and in 1944, they were producing 40% of all the vegetables grown in the US.  These small scale but widespread gardens and orchards contributed to the food landscape in many subtle ways beyond just the food produced on them.  A diversity of growers and a diversity of what is grown seems to go hand-in-hand.

This startling illustration by the Rural Advancement Foundation International-USA depicts the realities of our dwindling agricultural biodiversity with a sampling of the commercially available varieties of 10 commonly grown vegetable seeds from seed houses in 1903 at the top of the chart and the dramatic reduction in varieties of those same vegetables at the National Center for Genetic Resources Preservation just 80 years later. 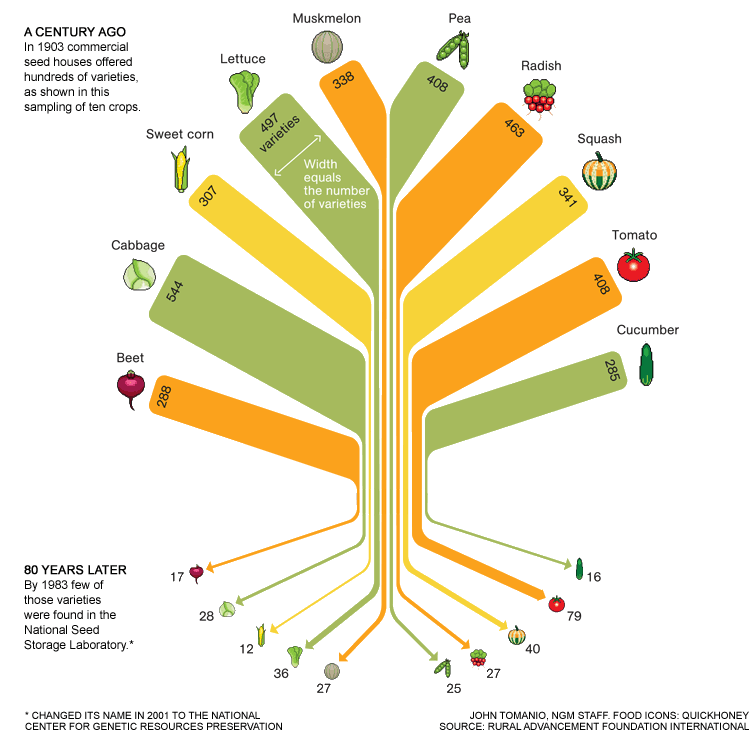 And it is not just the 1o varieties shown above that are at risk – this article by National Geographic puts the estimated diversity loss of all historic fruits and vegetables for the US at 90% while this Food and Agriculture Organization of the United Nations article puts the total global decrease of plant diversity at 75% in the last century.

But there is good news in the What’s For Dinner in 2025 discussion as well.  Recessions spur backyard growing in a big way because growing your own food is cheaper than buying it.  And this last recession happened in the age of the internet!  How to plant, grow and harvest videos populate YouTube and sites like Garden Girl TV.  Online seed houses for heirloom and open pollinated seeds have exploded in number and serve to connect the growers to a growing variety of available seeds.  Two of my favorites are Baker Creek Heirloom Seeds and Seed Savers Exchange.  Countless rural and urban farmers have blogs and vlogs, sharing their successes and failures and creating online communities that are (excuse the pun) growing.

Whether the online/rural/suburban/urban agricultural movement of people growing food where ever they live will be able to sustain itself over the long haul is anyone’s guess.  So a further bit of good news for future agricultural diversity is that Cary Fowler, along with the Consultative Group on International Agricultural Research (CGIAR) created the Svalbard Global Seed Vault to serve as a salt mine style back up of seeds from gene banks all over the world.

Every minute of Cary’s charming, engaging, sometimes scary* and ultimately uplifting 2009 TED Talk is worth watching!

* At the 8:30 mark he talks about the the extremely limited time (2 breeding cycles) that plant breeders have to get corn ready for the climate of 2030.  In the context of today’s GMO headlines, it is easy to forget that injecting genes into a food crop does not make “food”.  It makes a plant organism that still has to grow to sexual maturity, be crossed with another plant to even get the first round of seed to test.