Posted on November 27, 2015 by NearlyHomeGrown.com

I have never really wanted to grow corn since the small amounts I desire for home cooking are readily available at the farmer’s market in season, it takes up a lot of valuable space in an already tight garden plan and it is an environmentally costly plant to grow.  Corn is greedy.  Really greedy.

Then I promised my 8 year old that he could grow anything he wanted next year and flipping through a seed catalog he picked Strawberry Popcorn.  I dutifully ordered the seeds and we were researching growing, harvesting and drying the variety online when we ran across our first glimpses of Glass Gem Corn.  We marveled at the photos and videos of this varietal and were both smitten by its beautiful colors.  When it appeared on the Baker Creek Heirloom cover a couple of weeks ago, I found myself suddenly preparing for two varieties of corn in spring 2016 but still didn’t want corn in my garden proper.

My suburban lawn is in its second year of organic management (no herbicides, pesticides or fertilizers are used) so the conundrum of what to do with the corn made me consider planting directly in the yard as a solution to the space requirements and soil depletion problems of corn.  But although I don’t use chemicals on the soil, that is not the same thing as having good, rich soil for growing anything.  I had seen information on trench composting some time ago and decided to dig back in and learn a bit more.

There are a lot of variations on trench composting from the fill it as you go style to the much more elaborate hugelkultur style installations.  I opted for something closer to the style in the video below.

I started with a trench and filled in a layer of browns.  These are leaves and pine needles that have been composting for a year now.  The leaves have already broken down into a rich soil structure but the pine needles take a bit longer. 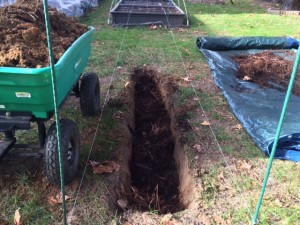 I followed the layer of browns with some rich, dark, nearly done compost from my two tumbling composters.

I topped the compost with another layer of the browns. 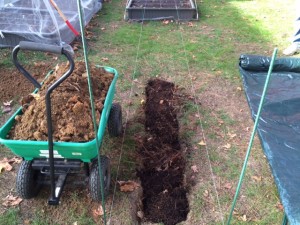 And finished it off by replacing a top layer of soil, mounding it up a bit since it will settle as the layers of browns and compost continue to biodegrade and compact.

The Glass Gem Corn will be planted on either side of this trench in spring and I will need to do the same elsewhere in my yard for the Strawberry Popcorn.  I hope to have a staggered planting system in years ahead where I grow on top of a trench a year and a half after it is filled with rich, organic matter that has had time to be broken down by microbial and worm activity.