Hello, My Name Is…

Posted on January 23, 2016 by NearlyHomeGrown.com

This year will be my fifth year as an urban food grower.  It will also be my fifth attempt to create plant markers that are still legible at the end of a growing season.  With 52 varieties of annuals planned in addition to the handful of perennials that live in my garden, knowing who is who can be important.  This is particularly true when it comes to saving seed.

In previous years I have tried cheap plastic tags labeled with sharpee, which faded after just a few short months followed by the same plastic tags using pencil after reading the graphite would weather better than ink.  They did not fade quite as much or as fast as the sharpee had, but were still hard to read after a few months of sun and rain.  Next up was wine corks with sharpee thinking that the porous nature of the corks would absorb the ink better than the hard plastic had but which also faded into illegibility by mid season.

For this year’s garden I was determined to find something more lasting and attractive for my plant markers since the majority of these varieties will be planted year after year.  I spent some time researching permanent plant markers and found these copper plate markers that can be inscribed with a pen and a bit of elbow grease. 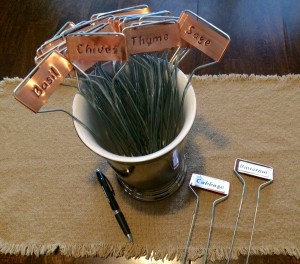 The initial cost to purchase and the time to label are certainly higher than my previous marker attempts but the end result is much more pleasing and should endure for many years to come. 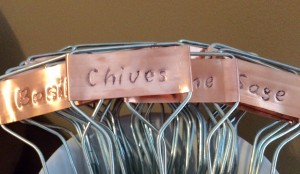 Each year my garden gets better and better #kaizen