Posted on March 29, 2016 by NearlyHomeGrown.com

The single, yellowed leaf I found on one of my paste tomatoes at the end of February was actually the opening shot of a fungal tug-of-war that will likely continue for the whole of 2016’s growing season.  The Septoria Leaf Spot fungus which can cause damage to tomatoes by defoliation leading to sunburned fruit has been mostly contained by removal of affected leaves and regular use of a homemade organic fungicide (1 gallon of water, 2 TBS vegetable oil and 2 TBS baking soda) but the close proximity of the plants to each other while they are stuck in my indoor grow room was almost certainly encouraging the spread of the fungus.

With about a week to go before the last frost date for my area, I have been obsessively checking the 15 day weather forecast for the past few days to determine whether I could risk putting the tomatoes out a little early to give them some much needed space, fresh breezes and sanitizing sunshine to inhibit the fungus from spreading.  Today I rolled the dice and moved them to the great outdoors!

The PVC tubes that my bamboo tomato supports fit into are already in place so the plant roots will not be disturbed later in the season when they are necessary and the tomatoes have been hardened off.

Last year I had a handful of tomatoes that had blossom end rot so I saved eggshells all winter and crushed them into a powder to provide more calcium to the plants.  Tomatoes are a vine plant that will root along their stem, so mine were laid down in the channel I dug rather than placed upright.  Eggshells were spread beneath and on top of the root area. 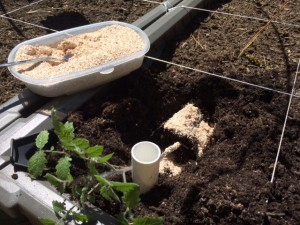 The stem is gently bent at a 90 degree angle several inches up from the top of the soil line from the starter cup.  Roots will develop along this stem and according to Charles H. Wilbur, more roots will result in more tomatoes.

Soil is patted down over the tomato root and around the bent stem and any leaves touching or near ground level are removed to avoid splash up from the soil leading to new and exciting fungal infections. 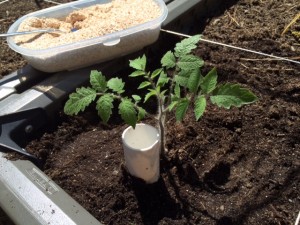 Repeat 37 more times then relax and start compiling fabulous tomato recipes like this one while you wait for the fruits of summer to appear!