Posted on September 17, 2016 by NearlyHomeGrown.com

Late blight is wrecking havoc on North Carolina tomatoes this year, particularly the heirloom varieties.  Last year I was pulling down green tomatoes in late November and this year they were pretty much done by late August.  C’est la vie.

Luckily, there are some good things happening in the kitchen while I wait for the fall lettuce and spinach to fill in the garden.  I have been working with my pasta maker, trying different shapers and getting the hang of the process.  This week I wanted to try adding some fresh basil into the mix so I chopped it very finely and tossed 1 gram of it with the Anson Mills pasta flour before adding it to the maker using the angel hair shaper. 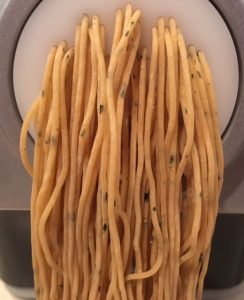 The result was very pretty and did have a hint of basil taste.  I was concerned that the basil would interfere with extruding and/or the pasta’s ability to hold together when cooking, it did neither. 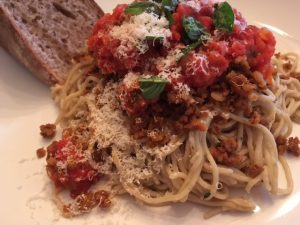 I want to try the experiment again with a little more basil which means I should probably use the spaghetti shaper to be safe.  I had already started the sauce when I decided to try adding basil to the pasta but next time I would like to try it with a simple butter garlic sauce that won’t overpower the flavor of the pasta like the thick, homemade tomato sauce in the photo above.

I am also wondering if I can do the same thing with finely chopped, fresh spinach and a thicker noodle.

With fall/soup season just around the corner I have also ordered some kansui, the alkaline ingredient that gives ramen noodles their distinctive texture and the ability to hold up well in soups.

I am beginning to suspect that the folks that sell fresh pasta and noodles at the Farmer’s Market aren’t doing it to make money, they just want an excuse to make more than they can personally eat…