Posted on August 2, 2015 by NearlyHomeGrown.com

As my Marketmore and Chinese Yellow cucumbers swing into full production I have been looking for a recipe that I recall from childhood.  I have heard them called refrigerator pickles, cucumber salad, marinated cucumbers and vinegared cucumbers, though there are multiple meanings to some of those monikers so I am sticking with calling them vinegared cucumbers.

Pro Tip – when picking cucumbers, bring them in and pop them into an ice bath to remove the “field heat” and cool them down quickly.  They will keep better for longer with this trick.

There are many variations on this recipe and I tried a couple before cobbling together this one that comes closest to the crisp, bright taste I remember in my grandmother’s vinegared cucumbers:

Pack cucumber slices into two 1/2 pint canning jars (or whatever you have that you can put a lid on), packing red onion along sides and top.  Mix together vinegar and water and pour over until cucumbers are covered.  Close jar and marinate in the refrigerator for at least 12 hours. 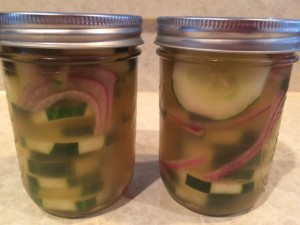