After three weeks of much longer than normal hours during the week and attending conferences on the weekends in service to my day job, I had a two whole days at home with my garden this weekend.  I found it doing very well despite my glancing harvests and prunings, but also in need of some more thoughtful attention so I started on a prioritized list of what needed to be done…and then the doorbell rang.

Earlier this year I had struck up a conversation about fig trees with one of my subdivision neighbors after he noticed my 2nd year trees that are a lot more potential than production even at this point.   He had shared with me how productive his established tree was with quantities that sounded more fantasy than fact compared to the 25 or so figs I expected off of my 4 immature trees.  He arrived at my door on Saturday morning with a bag full of figs, the third such of the morning he told me!

Most of the figs were at the peak of ripeness, but a few were so soft that even the weight of figs on top of them in the bag distorted and split them.  I popped the bag into the fridge to firm up the softest of them and stop the ripening of the freshest and went online to see what my options were.

Canning jam and/or preserves was the resounding result, despite changing search terms several times and going 4 search results pages deep.  I did not feel ready to do canning on my own and hadn’t purchased a hot water bath canner yet, but there was this unexpected bounty to deal with…

An hour and multiple recipes later, I was ready to make my first fig jam.  The recipe was simple: 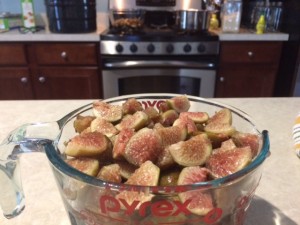 It was an easy recipe and the figs smelled and tasted heavenly as they and the sugar slowly caramelized on my stove top.  I was nervous about the canning part but made an emergency phone-a-friend to my canning mentor to ask a few questions and by the end was more focused on saving every drop of this delicious concoction than thinking of all the ways the canning portion might go wrong.

I ladled the preserved into 5 half-pint jars and prepared my first hot water bath.

They cooked for 10 minutes in the hot water bath after it returned to a boil.  I set the jars on cooking cooling racks to increase the air circulation and was pleased to hear my first *pop* of a sealing jar not long after. 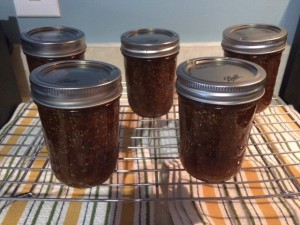 All 5 jars popped within 3o minutes of coming out of the bath and are now labeled and in my pantry.

The title of this post is about doing what needs to be done when the opportunity exists – trying a new fig jam recipe and canning for the first time were not on my to-do list, but I couldn’t let this unexpected windfall go from overripe to compost in my refrigerator without at least trying my hand at canning to preserve the bounty.

As a postscript, I had enough jam for 5 3/4 jars and since the 6th jar did not meet the headspace requirements for the canning recipe, I sealed it the same as the others but put into the refrigerator immediately after it too popped.  Tonight’s desert was a french bread smothered in this homemade jam and it was wonderful!