Posted on August 7, 2015 by NearlyHomeGrown.com

The wonderful thing about being taken under the wing of a traditional southern food mentor is that in addition to the lesson at hand, there are other tantalizing tidbits sprinkled throughout the lessons like breadcrumbs, just waiting for me to pick up the trail.

During my green bean pressure canning lesson, the utensil drawer was opened to look for some other object and the Norpro Wood Corn Cutter and Creamer made its debut into my life.  My mentor explained that device is used to cream corn, which she does annually with Silver Queen, her favorite hybrid variety.  The tool was dropped back into the drawer and the green bean lesson continued.

That night I began researching the tool and process of making and preserving creamed corn.  My mentor uses the “Another way” method described at the bottom of this link over at the National Center for Home Food Preservation (the online bible for how to safely preserve food).  The creamer tool was so inexpensive and the corn so abundant at the NC State Farmers Market, I had to give it a try!

My whopping 45.5 lbs of corn had 65 ears in it and sold for only $25 – one of the many great reasons to grow or buy abundantly in season and preserve in wholesome ways for the off season.

I enlisted help from the cutest and most enthusiastic corn shucker imaginable to get through the pile.

Once shucked, the corn was washed, trimmed of any ear worm damage and ready to be creamed.  It took a little experimentation to get the cutters to the right height for the chunkiness I desired.  I found compromise by setting it on a creamier height and using knife cut corn once every 8 or so ears to get nice big kernels.

Following the instructions from my mentor and the National Center for Home Food Preservation the creamed corn was cooked in two double boilers for about 10 minutes. 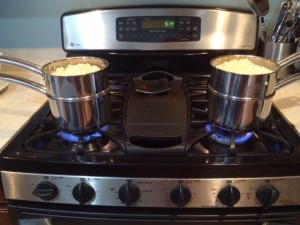 Once thickened it the pots were set in an ice bath to stop the cooking process. 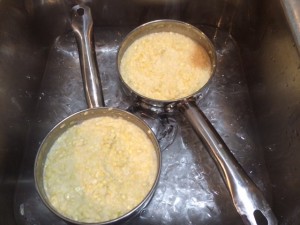 Once cooled, it was ladled into the freezer bags that work with my vacuumsealer at serving sizes of roughly 15.5oz each.  They were frozen flat to take up less space then vacuumsealed. 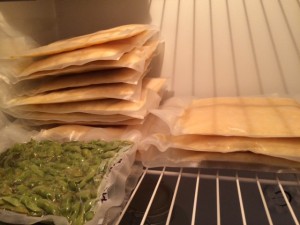 All in all, my 45.5lbs of corn ended up being 15.5lbs of creamed corn with much of the difference being the cobs that were cut up and added to compost so they were a gain for next year’s soil also.  The entire process took about 4 hours from shucking to the last batch being put in the freezer and finished with a total of 16 servings.  I froze 15 of them for the months to come and made one fresh that night.  I knew the project was a success (and one likely to be repeated before the end of corn season) when my little shucker took his first bite of our homemade creamed corn and asked if there was enough for seconds.